Want to know the official title? Of course you do. Behold: Make It Mighty Ugly: Exercises and Advice for Getting Creative Even When It Ain’t Pretty.

The book doesn’t even have a cover yet, but my publisher must have listed the metadata about it somewhere public, because all the booksellers have slurped it up and now you can pre-order it from all manner of places like IndieBound (support your local indie booksellers, friends, they’re the heart of the book world!), Powells, Amazon, Barnes and Noble and Chapters.

A further note about your local indie bookstore: You can ask them to order the book for you, too – it’s not just an online thing! Just go right into the store or phone them up, give them the title above and my name, and though they might raise an eyebrow that you’re asking them to order a book that won’t be released for another eight months, I bet they’ll also smile that you’re asking them to do the ordering. Because they love you, you book fanatic, you. And they love books.

So what do you get when you pre-order the book? Well, you get the book, obviously, as soon as it comes out in early September. Early September is so long from now that you’ll pretty much be buying yourself a surprise. And who doesn’t love a surprise?

Also, you’ll get to wear the special feather in your hat that says you bought the book even before it had a cover. Talk about being an early adopter!

And finally, you can help indicate in some small way to the people and machines that track this sort of thing that there is interest in this book, and that might maybe someday lead them to, like, pay more attention to selling it to people. Which would be a very good thing.

As the time between now and then shortens, I’ll tell you way more about the book – like what you’ll find in there and what that’ll do for you, and what’s on the cover, and what I ate while I was writing it, and where I wrote it, and all sorts of stuff you never knew you wanted to know. But for now, it’s time for early adoption! Suspense and anticipation is what it’s all about! 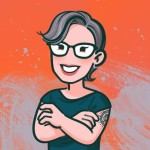 Kim Werker runs Mighty Ugly. She's a writer and freelance editor whose latest book, Make It Mighty Ugly, is coming in the fall of 2014. Kim tries to make something – anything – every day. Many of those things are awful; some are not. Learn more about her work, teaching schedule and ragtag adventures at kimwerker.com.